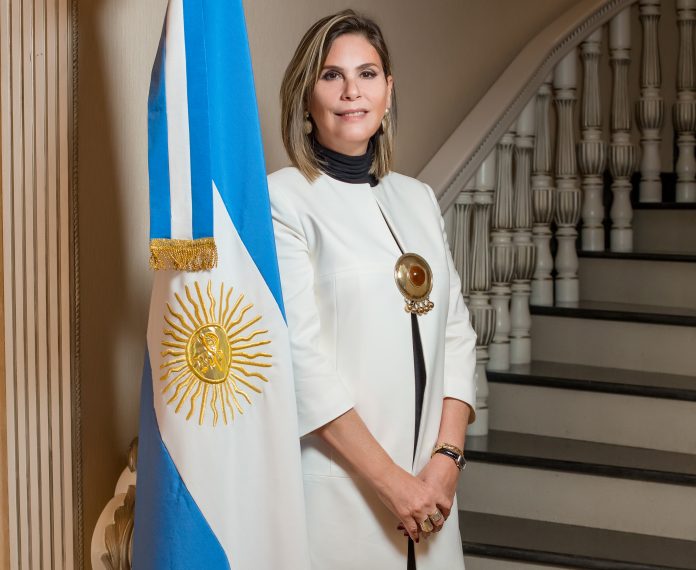 Spouse of Argentinean Ambassador to Azerbaijan

Question: The role of diplomatic spouses is often overlooked. How would you describe the role of an Ambassador’s spouse in diplomacy?

Answer: A diplomat’s wife has an original and substantial role in the art of diplomacy. A diplomatic spouse is a type of companion that is both tolerant and adaptable, a partner that accustoms herself to walking alongside her husband, looking in all directions with eyes wide open. I would describe her as a wall that both supports and complements—it is an interactive image. She is at once the manager of her husband’s thoughts and ideas and the shepherd of the family herd. The spouse’s character and personality are fundamental, because her particularities are the image of the couple’s strength, a couple who together must accomplish and impart, offer and receive, without losing the objective of serving their nation. That must never be forgotten—being a diplomatic spouse is a profession in the literal sense of the word, an additional profession attached to the one she chose for herself.

Q.: You are originally from Cuba. As someone whose spouse is also of a different nationality, I am curious to know, what is it like for you to represent Argentina abroad? What role, if any, does your Cuban heritage play in your role as a diplomatic spouse?

A.: It’s very common in the diplomatic community to see transculturation in diplomatic couples, where social and geographical circumstances tend to make effective relationships between people of diverse origins. In Argentina, spouses are required to have the same nationality as the diplomat due to legal reasons related to immunity. For that reason, I have personally been an Argentine citizen for over 30 years. A diplomatic spouse’s personal origins only influence the personal touch with which we receive people or forge new relationships. Without completely leaving behind your roots and cultural identity, the objective, of course, is to represent the country that assigned you to your current destination.  In my particular case, it is a privilege to be of both nations—it’s a gift, an extra, and I’m deeply grateful for that feeling of belonging to both nations, two countries that I love and one which I represent. I feel lucky to have two countries in my heart.

Q.: What do you find to be the most challenging aspect of being a diplomatic spouse? And what is the most rewarding?

A.: The most stimulating part of being a diplomat’s wife is the constant challenge of navigating interpersonal relationships with people from diverse cultures. For me, it generates passion to be surrounded by various languages, idiosyncrasies and ways of communicating. I believe that is the aspect of my personality that I would highlight and the strongest tool I have acquired that allows me to accompany my husband. The reward? The greatest reward I have is the close relationships with the rest of the community. This is especially important for me.  I may be the Argentine ambassador’s wife, but authentically I’m Marta.

Q.: Being married to a diplomat is challenging for numerous reasons, including living far away from loved ones and moving frequently, how do you and your husband support each other and your family?

A.: For the family of a diplomat, the greatest challenges are the consequences of transculturation. Either the family perseveres, or circumstances make it crumble. In that aspect we are a very tight-knit family that travels as one unit. Our contribution to the nucleus of the family is emotional armor, it’s a sort of membrane and cement that keeps us together, and at the same time each member of the family contributes their part to the unity of the family. Communication and affection is what we provide, and the result is tangible.

Q.: You are a doctor by profession. Talk a bit about how being a diplomatic spouse has influenced your career path.

A.: Effectively, I am a medical professional. My specialty is plastic and reconstructive surgery, burns and esthetics. I graduated from the University of Havana, Cuba and then revalidated my license in the University of Buenos Aires in Argentina. One could say that I’m some sort of a double doctor, which has its professional obstacles. When I’m in Argentina I work as a doctor, and when I’m abroad I function as the Ambassador’s spouse, but I am always updating my medical knowledge by attending various international congresses. In most destinations where we’ve been posted, I’ve engineered ways to work in something related to medicine, due to my perseverance and my power to orchestrate both functions simultaneously. It’s always a big challenge!

Q.:  When did you move to Baku? What surprised you the most from your time in the country?

A.: We have lived in Baku for the last 3 years. My husband had the honor of opening the Argentinian Embassy in this beautiful country. If you ask what surprised me the most about Azerbaijan, I would say it is the kindness of its people. I have a continuing relationship with the diplomatic society and luckily also with lots of local people. I always try to involve myself autonomously in the culture of the countries in which I’ve lived; I’m very interested in the human being per-se. I feel that Azerbaijan is a part of my affections, to the point where I truly get emotional hearing its extremely beautiful anthem and seeing its flag.

Q.: What activities have you become involved in during your time in Baku?

A.: During my time in Baku…It’s probably easier to reply with the activities in which I haven’t been involved! I’m very active and interested in almost everything. The effort of trying to help our two distant countries to find each other and get to know each other is what demands most of my time. I assure you that I’m working 24 hours a day and on every minor detail in order to achieve that objective. I’m a part of the Diplomat Spouse Association and participate actively. We do various activities during the year, both to become more involved in society, and to help each other mutually.

I challenged myself to learn Russian in order to communicate, and I think I’ve succeeded. It used to be really stressful not being able to ask for something as simple as a glass of water the way I like it, fizzy with lots of ice and lemon, the opposite of what is customary here. But thankfully, I think I have accomplished much more than that. Language is a great tool for communication, but I have also discovered a second and very strong method of communication –art!

Q.: You have received recognition for some of your artwork in Baku. Could you tell us a little about your art?

A.: I gained an extra tool for communication thanks to my beautiful Turkish neighbor Pakize. She invited me one afternoon to the studio of the artist, SakitMamedov, and I went there without ever having touched a brush before in my whole life. The funniest thing was that I couldn’t even communicate due to the language barrier, and so with zero experience and absolutely no ability to communicate verbally, we developed a fun and original system of signals, which was an excellent exercise for my brain, and from there I passed to the canvass the language that bonds us without words.

Then I met Turán. She helped me become friends with the colors and oil paints. She made me translate my feelings to the canvas with a paint brush. She is my painting instructor and a true Azerbaijani talent—a bright, young woman, what else could I ask for!

I’ve been painting for the last two years, and twice have had opportunities to exhibit some of my paintings, cementing my new tool for communication, art.

Q.: What is your favorite thing to do in Baku or Azerbaijan and why?

A.: What I like to do the most in Baku might seem simple, but it’s simply mesmerizing: watching the Caspian Sea from my balcony – sometimes when it is cold, it appears completely still and solid – watching the sun rise from the east every morning, and the moon reflecting in the sea at night, while just breathing in the air. What a question!

Q.: Azerbaijan is quite proud of its national cuisine. What is your favorite Azerbaijani food or dish?

A.: The kitchen is another way for us to get to know each other better, because you smell food, mix it, swallow it, and it stays with you, inside; it makes you a part of a shared experience. Shah pilaf has to be my favorite, as well as herb gutab. They are very original flavors and different to our own. I also try to share the Argentinian cuisine, empanadas, asado, wine, and dulce de leche and –why not! – mate. Just as I’ve acquired a taste for delicious Azerbaijani tea, I’ve taught my friends how to drink yerba mate with hot water and our traditional metallic straw.

Q.: Is there anything that you have not yet done in Azerbaijan that you would like to do in your remaining time in Baku?

A.: Something I haven’t done yet in Baku? Let’s see, I would like to go fishing! But of course I’d return the fishes to the water afterwards.

A.: What I admire the most in my husband is his honesty and vocation of service. He really is someone deeply involved in his duties and has an outstanding clarity in his objectives. He treats every single person with this same simplicity, and yet at the same time he is a man of deep thoughts – pragmatic, concise, and efficient.

What does he admire in me? Though he is a man of few words, his admiration for me is clearly manifested by the way he looks at me with his soft bright smile – those who know him will know what I’m talking about. He sees me like a whirlwind, interacting with everyone in different ways at the same time. He always watches me from a distance. I think he also admires my perseverance; we have been together for over 30 years.

A.: They say that behind every great man, there is a great woman. In our case it’s besides, BESIDES a great Carlos walks Marta.

Thank you very much, 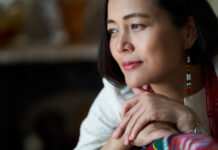 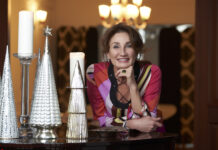 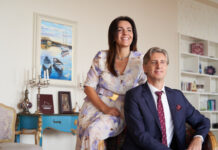 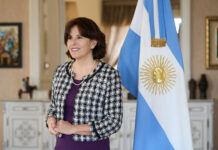 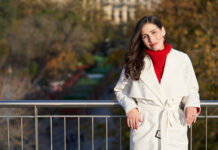 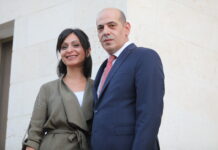