The celebration will start with a yoga session, coordinated by ISKCON Shivananda School of Yoga, at Atesgah Fire Temple on June 17. Then, open-air yoga sessions will be organized at Yanar Dag on June 20, at Heydar Aliyev Centre Park on June 21, at IcheriSheher on June 22, at Gobustan National Historical-Artistic Preserve on June 23 and at YARAT Contemporary Art Space on June 24.

In addition, one open-air yoga session will be held at the Seaside Boulevard of the city of Sumgait on June 18.

The sessions are free and some busses for transportation will be arranged by the organizers, but registration is required.

Moreover, public yoga sessions will be held at Yoga Shahi Studio in Globus Centre on June 19 and June 23, at Pullman Hotel Baku on June 21, and at Caspian Plaza on June 19-24.

The word ‘yoga’ derives from Sanskrit and means to join or to unite, symbolizing the union of body and consciousness. It is a combination of physical exercises and breathing techniques which enhances physical, mental and spiritual health of the practitioner. It consists of simple techniques which could be followed easily by persons of all ages.

International Day of Yoga is celebrated annually on June 21 since its inception in 2015. The idea of International Yoga Day was proposed by Indian Prime Minister Narendra Modi and supported by 175 countries. 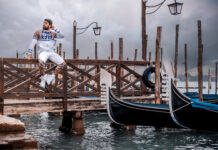